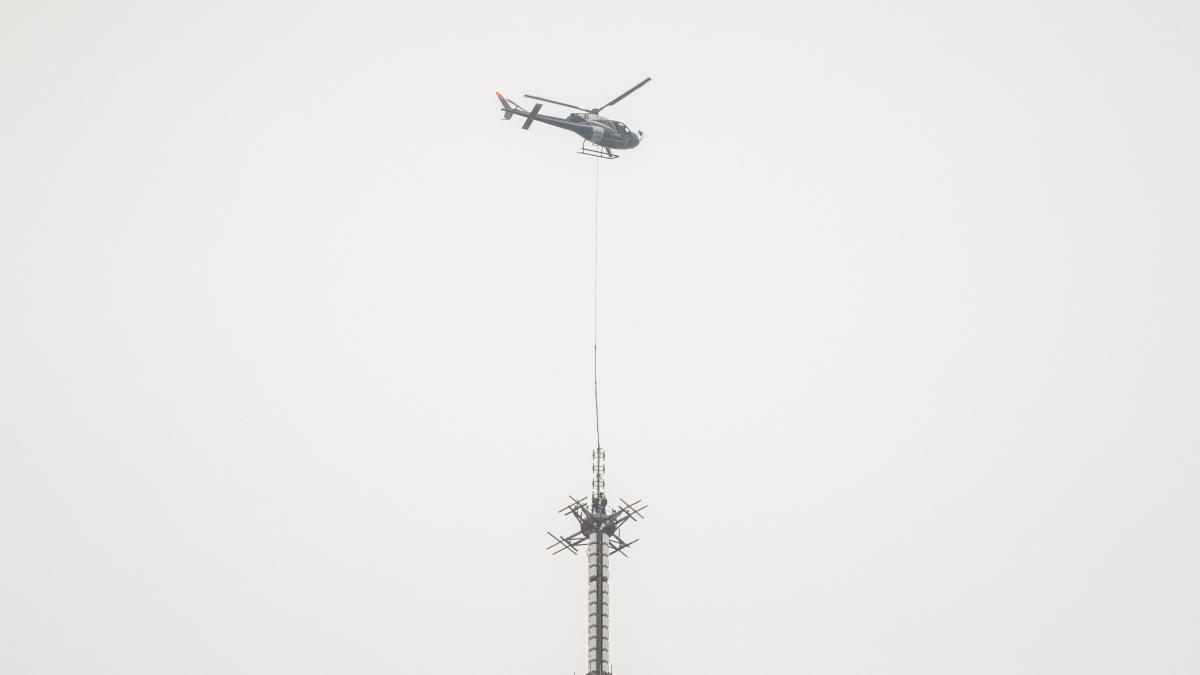 The Eiffel Tower is growing

TDF Group installs a new 20-foot antenna to broadcast digital radio in Ile-de-France At 11.15 this morning, TDF Group performed an extraordinary technical operation, installing a new 20-foot radio antenna at the top of the Eiffel Tower to broadcast digital terrestrial radio (Digital Audio Broadcasting or DAB+) across the entire Ile-de-France region. The new antenna has given France’s most famous monument a height boost, now reaching 1,083 feet.

The spectacular operation was carried out by helicopter, and was unlike anything seen before. The Eiffel Tower had stayed the same size for 22 years, and this was the first time that a helicopter was used to install new equipment on it.

The new DAB+ antenna has been added above the pre-existing antennas at the top of the Tower, which broadcast nearly 30 Digital Terrestrial Television (DTT) channels and 32 radio stations to 12 million Ile-de-France residents, in a radius of nearly 50 miles around the monument.

Since the first experiments in wireless telegraphy by Eugène Ducretet in 1868, the Eiffel Tower has established its position as a center for innovation and excellence in audiovisual broadcasting. France’s first radio station, called Radio Tour Eiffel, was created in the early 20th century and stayed in the Eiffel Tower for nearly 20 years. In fact, it was the Tower’s ability to broadcast radio that prevented it from being dismantled.

The new antenna will allow digital DAB+ radio to be optimally broadcast in Ile-de-France. It is 20 feet tall, weighs 770 pounds, and was designed by TDF experts at the Liffre engineering center.

Since 1991, the TDF innovation teams have been working on designing DAB+, Hertzian digital radio. As a complement to FM broadcasting, this technology makes it possible to broadcast 13 radio stations on the same frequency, while FM bandwidth only allows one station per frequency. France’s DAB+ roll-out started in 2014, near major cities and main highways, in line with the deployment plan established by the Higher Audiovisual Council (now known as Arcom).

The Eiffel Tower has always been a symbol of innovation. It was also the site for TDF’s experiments in Ultra High Definition (UHD) Digital Terrestrial Television.

Jean-François Martins, President of Société d’Exploitation de la Tour Eiffel, explained: “Since it was created, the Eiffel Tower has constantly embodied audacity and technical progress. Due to its history, the Tower has a very strong connection with radio and has always been a pioneer in the area of communication. The recent addition of this DAB+ antenna is further proof of this. The monument is continuing its public service mission, offering “radio” media a new horizon. We are proud to contribute alongside the TDF teams.”

Olivier Huart, CEO of the TDF group, declared: “For over forty years, TDF group has been placing its industrial skill and expertise at the service of radio broadcasting in France. This unprecedented technical operation, performed on a site as exceptional as the Eiffel Tower, is a huge source of pride for the entire company. It took over a year of preparation, in close collaboration with Société d’Exploitation de la Tour Eiffel (SETE). The Eiffel Tower is now ready to start broadcasting digital terrestrial radio (DAB+), to make it as accessible to listen to as FM radio or TNT for Ile-de-France residents.”

As an operator of neutral, open infrastructures, TDF supports digital actors in tackling strategic connectivity challenges in both mainland
France and French Overseas Territories. Whether with radio and TNT broadcasting, Ultra High Speed mobile coverage or fiber roll-out, TDF provides its clients industry expertise, a unique, innovative technological mix and first-rate local proximity. In a world where every day we are more connected, TDF has been working in both telecommunications and media for over four decades to connect territories and French people everywhere, faster, thanks to its fleet of 19,000 sites.
www.tdf.fr

On November 1 2017, the City of Paris chose SETE to run the Eiffel Tower’s operations and management as part of a 13-year public service delegation contract. SETE is a local public company, with 99% of its capital owned by the City of Paris and 1% by the Métropole du Grand Paris. Its board of directors is chaired by Jean-François Martins, Councillor of the City of Paris, and it employs approximately 360 people.
SETE is managed by Patrick Branco Ruivo and had turnover of €25.29 million in 2020.